School is in Session...

Well...  I'm back to school and it feels like I never left!  It's officially one week since the students returned and have finally seen all of my classes for the first time.  Today we got started on our first real projects! 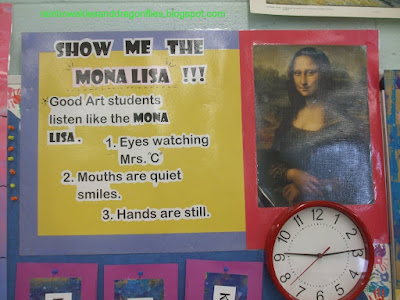 Thanks to Mona and Mr. Russell who's awesome idea it is, life in the art room has been very peaceful so far.  I changed up how I am using the cue this year and it's been going really well (hope I am not jinxing myself!).  Instead of just saying;  "Show me the Mona"  as the cue to stop, look and listen, this year I say;  "Mona" and I have the students answer back with; "Lisa".  I continue to say;  "Mona" until I have everyone's attention.  I did not have to say it more than twice today in a class to get everyone looking and listening!  I love it!  I have been saying it several times during a class to get them used to it and it's paying off!


This has been the mood in my art rooms for the most part.  Don't get me wrong I do have a couple of classes/students who have the potential to make me feel like this instead...

I've learned over the years to just...


It's so much easier that way.


I had all my new Kindergarteners and First graders.  Those of you that have been following my posts know that this is the first year I have EVER taught Kindergarten.  Our district has gone to a full day Kindergarten program so they have the opportunity to come to art class this year!


Let me just say prepping for Kindergarten is time consuming and necessary!  I can't wait until all of them can write their own names!  Some of them can, a lot of them think they can and a lot can not!  I wish I had a dollar for every time one of them started to spell their name for me after I asked them what it was!  I'd say;  "You don't have to spell it, just tell me what it is" and they would start spelling it again!  I stopped asking and just started looking it up on my seating chart.  I put all their names on their papers before class to save time.  When I passed them out they would keep saying;  "That's not my name!" I'd ask them;  "Well, are you____ ?"  They would answer with;  "Yes, but that's not my name."  I would just answer with;  "Yes it is"  and move on.

I have loved having them in class though, they are the most enthusiastic, tell you what ever random thing is on their minds group of students I had ever had! I can't wait to see what the year is going to be like with them!


I'm so organized at work this year it's scary!  It's been saving my life and sanity though.  My schedule is so jam packed that a few days my only prep is 8:30AM - 9:00AM.  My only other break is lunch which I usually eat while prepping for the afternoon.  All the new classroom management strategies I have implemented have been a life saver also!

I should have some student art work to show you by next week so, until then...