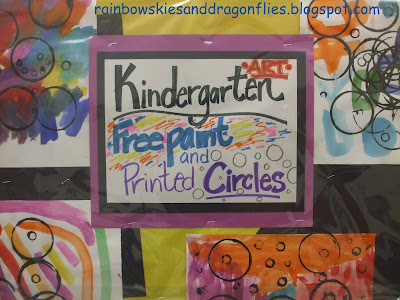 Well, I survived my 400+ progress report grades from last weekend so here I am with some awesome (I think) art created by my Kindergarten's!  Let me just say:  "I LOVE MY KINDER'S!!!"  I have been having the best time with my Kindergarten's!  I'm exhausted, but so in love with working with this group of students!  They have come such a long way since that first art class when I was scrambling to get names on papers and prepping numerous activities to keep them all busy for the full 40 minutes.  They are all writing their own names (yes, I still have to do a bit of deciphering, some of the names resemble a code by Da Vinci!)

Now they are all coming in, sitting down and ready to start creating!  Two weeks ago I painted with them for the first time.  The Kindergarten teachers said all week the students  kept asking when Art was because I had said we were going to paint!  I used the tempera paint cakes I had purchased with my Artsonia money. 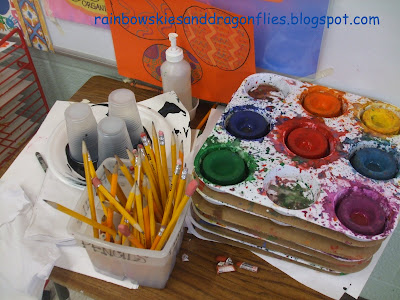 I started the lesson with how to get prepped to paint in the art room...  Once they got their paper and put their name on it, I called the students by tables to walk over and get their smock from the back of the bathroom door. 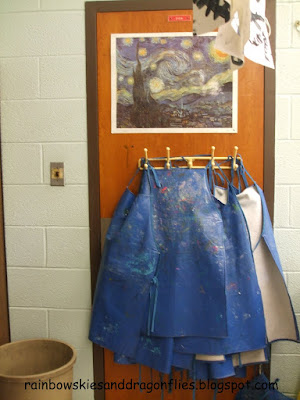 I physically walked over and showed them how to get their smock off the door and then walk away so other students could get in for their own smock.  I used one of the students as a model to show them how to put it on and we were ready to paint!  I demonstrated how to use the paint brushes and paints correctly and how to wash out their brushes between colors so they didn't get all mixed up.  (Note to self: get smaller smocks for Kinders next year!  They are being swallowed alive by the smocks I currently use!)  We're working with them though! 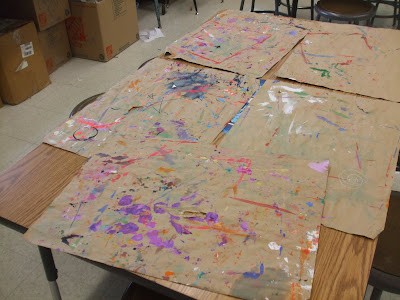 I passed out the painting place mats and had the kids spread them out on the tables.  I passed out the paints, water and brushes as they eagerly dove into the paints and began to paint their papers how ever they wanted.  The only rule was that they needed to cover the whole paper the best they could. 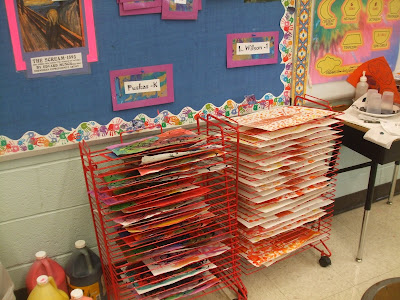 When they were finished painting, I showed them how to put their own paintings on the drying racks before they cleaned up.  Washing their hands is a little hard for a lot of them as they are too short to reach my soap dispenser and the faucet to turn on the water!  My room was not designed for the shortest members of our building!  I have been dispensing soap into one of the water buckets and letting them dip their hands in to get them soaped up!

During the second class the kids stamped circles onto their paintings using black tempera, plastic cups and old marker caps.  At clean up we had another refresher course in Hand Washing 101!  They like to soap up and immediately rinse it off before it can do any good!  They also just hold their hands under the water with out rubbing them together.  I went through the whole procedure for being "Scrub-A-Dub" clean after painting.  They thought it was quite funny how I gave the directions in a Sing-Song way!  I did however hear several of them sing the same directions to themselves as they were scrubbing hands!  Here are some of the painting/printmaking results... 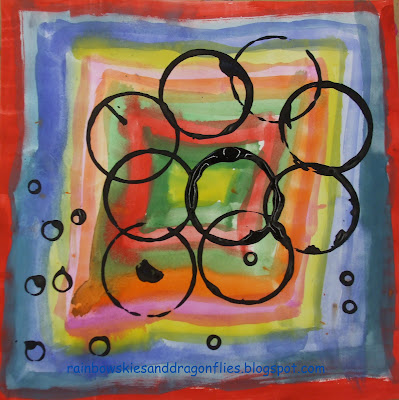 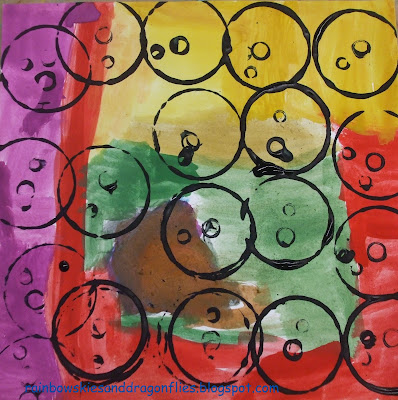 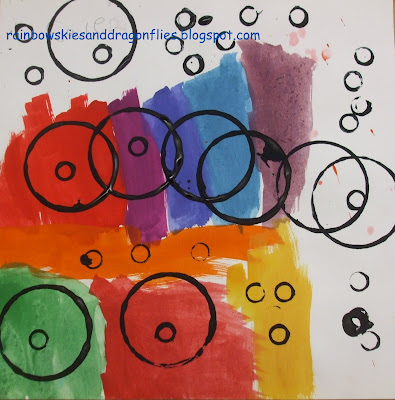 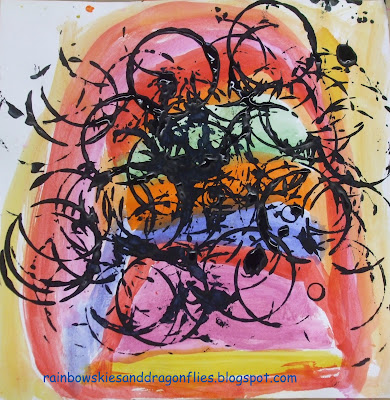 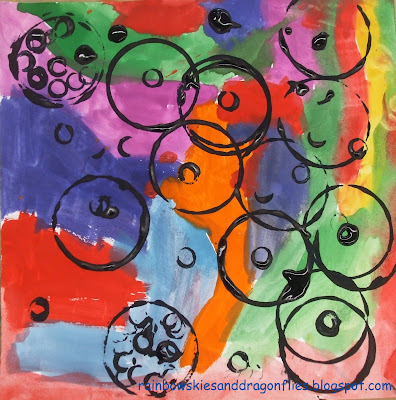 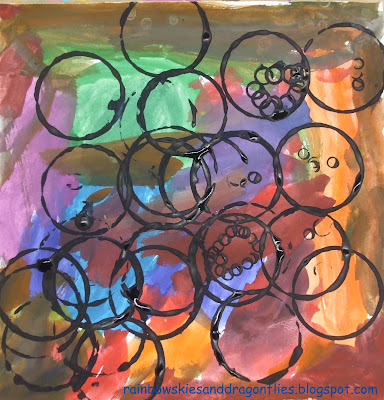 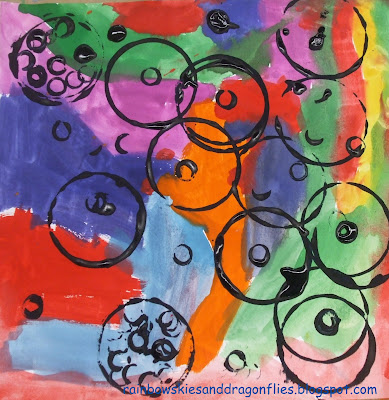 You can see that some of them were still wet when took the photos!  I hung some of them up on the bulletin board in the school's front hallway... 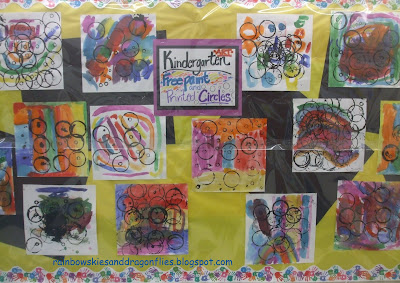 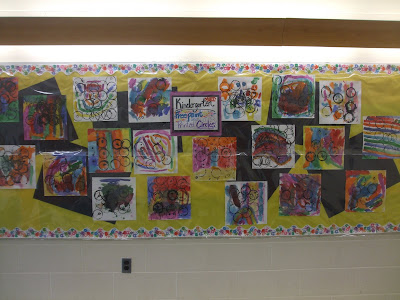 I put the pieces up late after school and a meeting on Monday afternoon so the display was up for a day with out the sign stating that it was the work of Kindergarten.  The day I hung the sign everyone kept exclaiming that they couldn't believe the Kinders made them!  They thought it was 1st or 2nd grade!  I think they did a really great job and I'm so proud of them! They are so proud of themselves!  These are some close-ups from the bulletin board display... 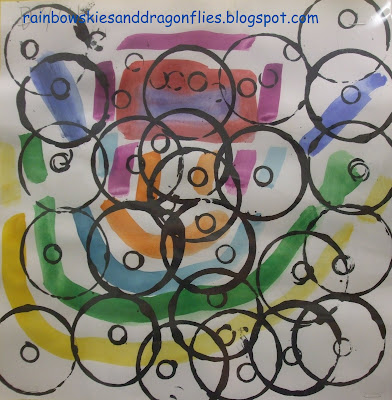 The reflections are from the laminating film I use to cover the art work so it is not destroyed at bus time by the bus lines. 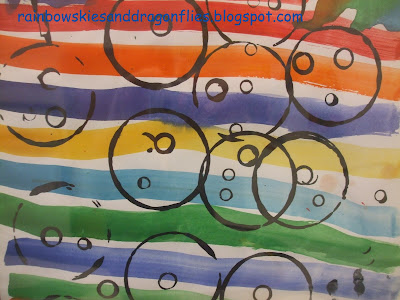 I hope everyone has a great weekend and a chance to re-charge so we can do it all again next week!  :)