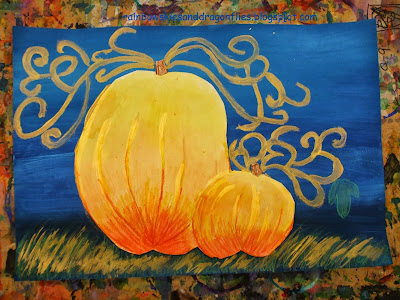 My 5th grades have been hard at work! We have been working on form and value for the past few classes.   They drew overlapping pumpkin shaped forms that we traced in oil pastel, orange at the bottom, yellow in the middle and peach at the top. 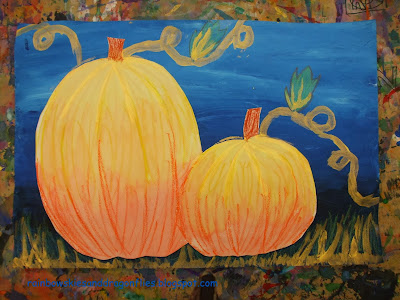 We used watercolor to paint in the pumpkins using different values of orange, red-orange at the bottom, orange in the middle and yellow-orange at the top. 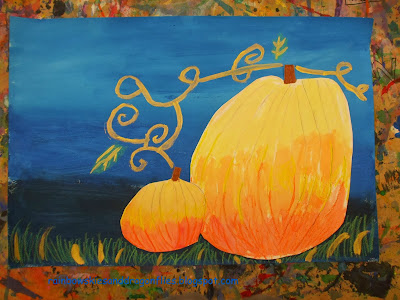 One class was spent on painting the backgrounds. The kids used tints and shades of blue to paint them in.  One of the students asked why we were painting them blue and not some other color...I asked the class to think about what we have learned about color in 4th grade... One of the students raised their hand and said I must have picked blue because it is the compliment of orange (yeah!) 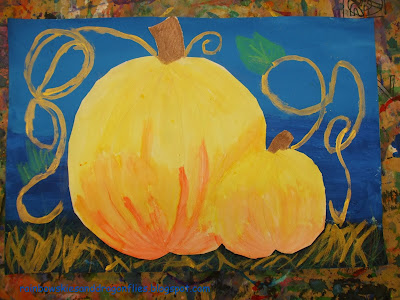 After they were glued onto the blue background we all agreed that they looked like they were floating in a sea...I had the students brainstorm...what could we do to/add that would finish their pictures?  The majority agreed that it was necessary to add something to ground their pumpkins.
Construction paper crayons in dark and light green were used to create grass, brown for the vines. As the students were working I grabbed some gold paint and had them use it to trace the vines, the brown was hard to see.  They also used it to add some gold to the grass and highlights to the pumpkins, Tah Dah! The finished pieces are stunning! The kids are really proud of their hard work! 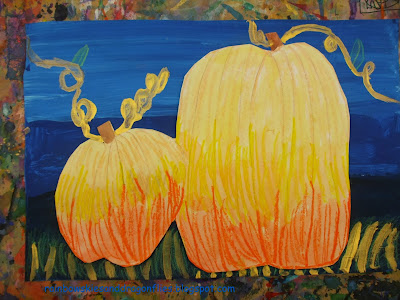