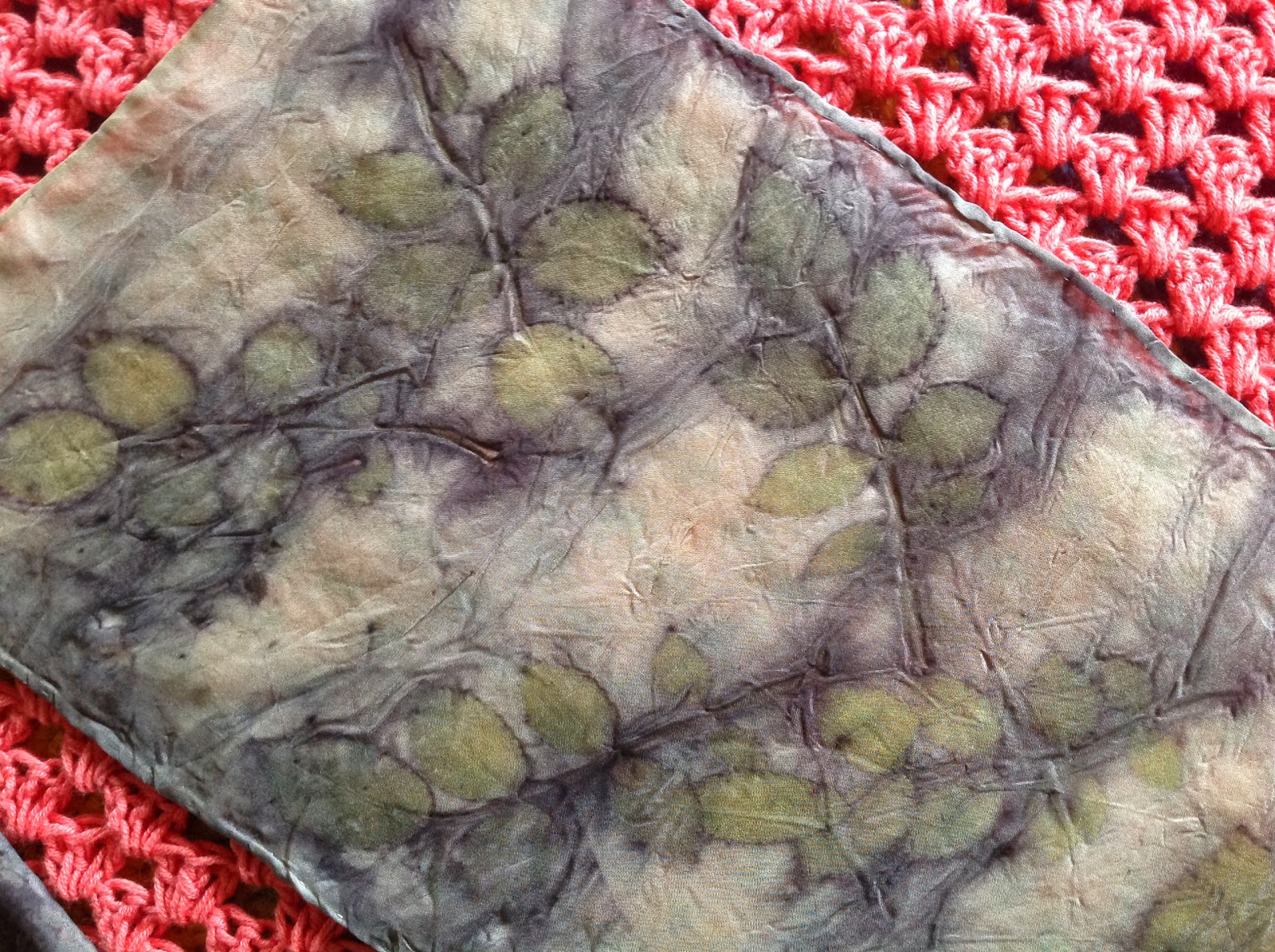 Rose leaves... eco-printed on silk, some were from wild roses growing in the woods by my house and some from shrub roses I planted years ago along my driveway...  since one had a strong, glossy leaf and the other a soft, almost fuzzy leaf i was curious to see if they printed different but they didn't, both printed the same. 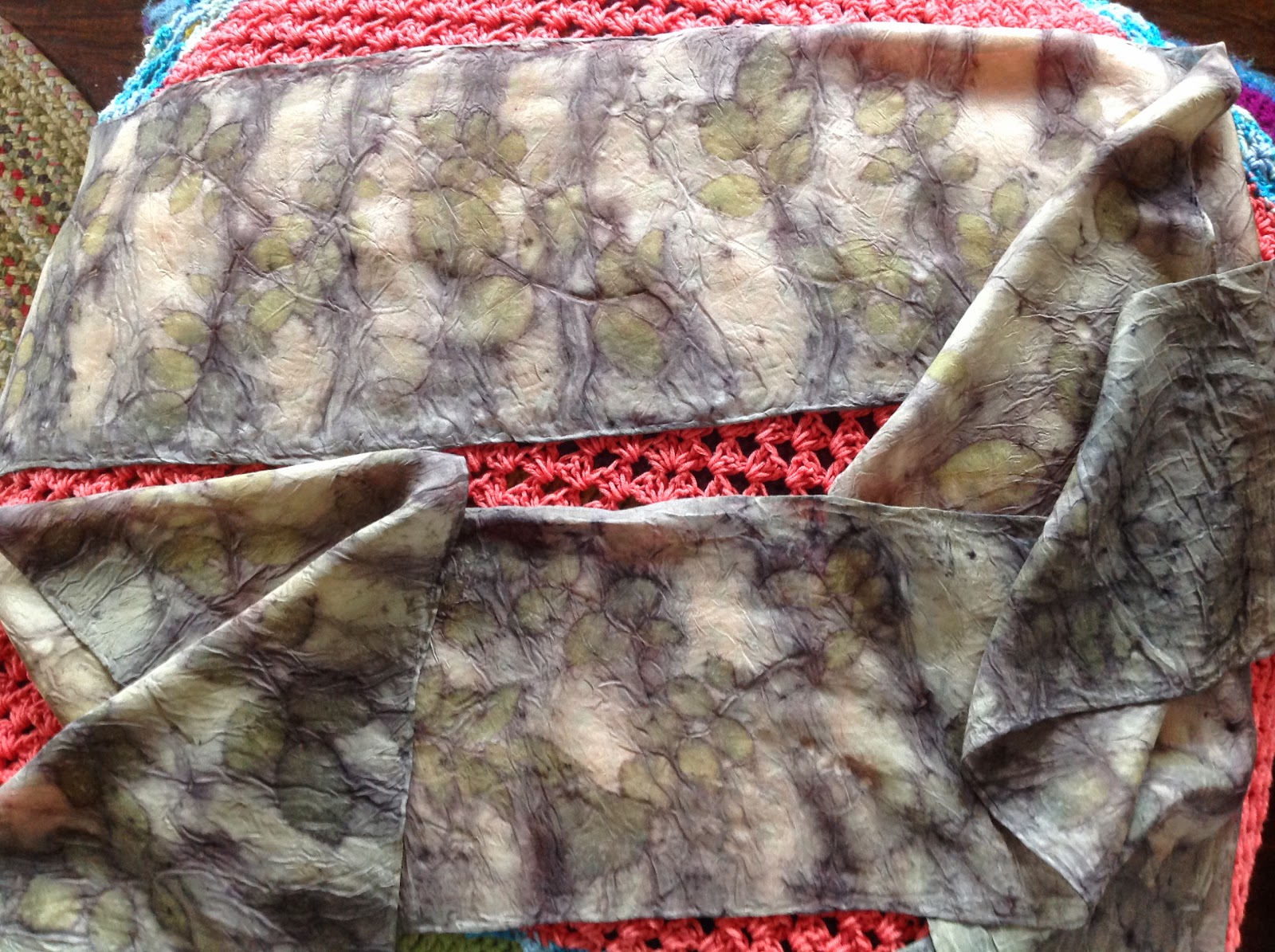 I over printed two scarves from my last eco-printing that didn't print well. They had some color but no prints.  The scarves had been in an iron mordant previously so I didn't re-mordant. 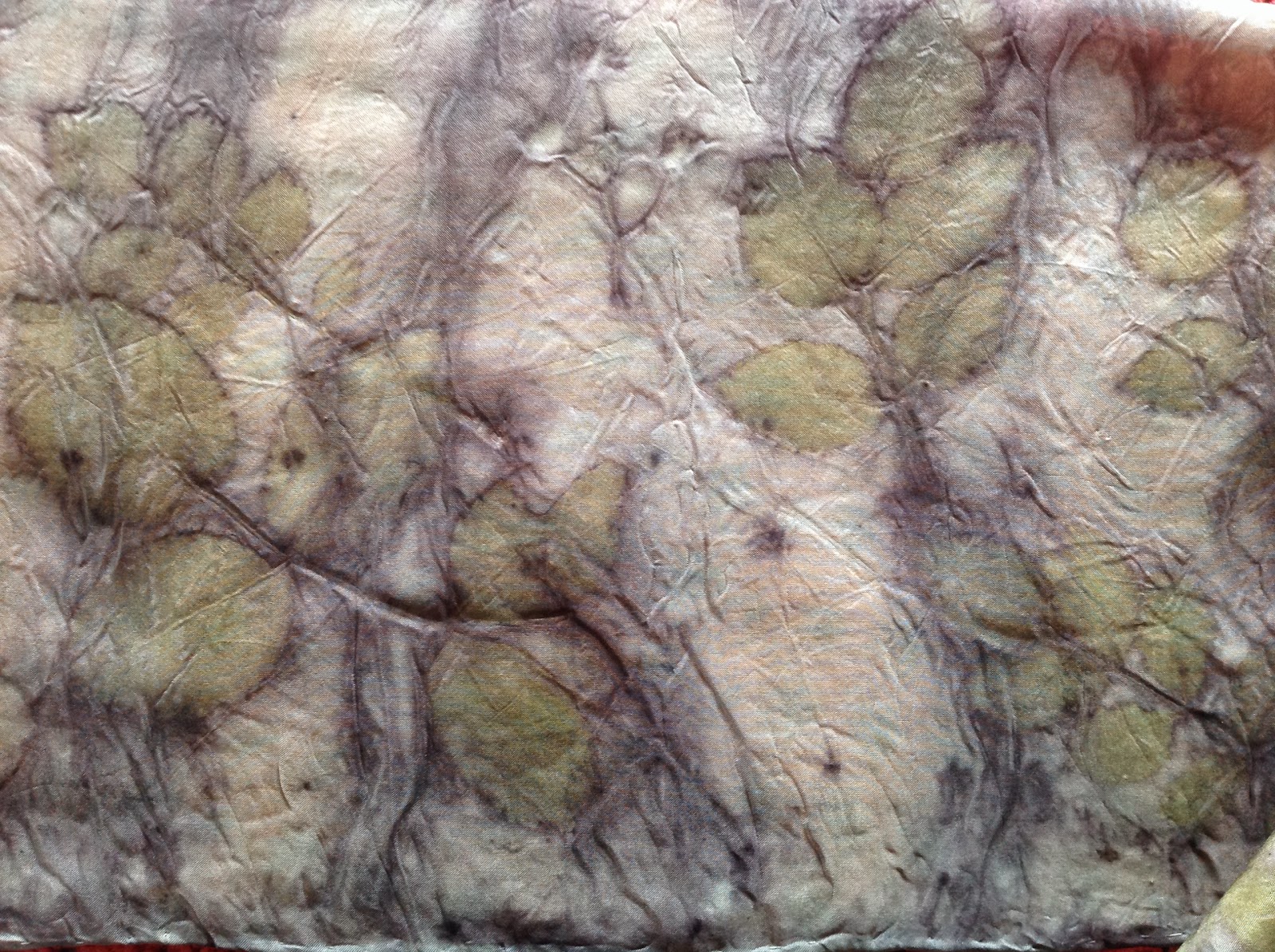 After boiling the two scarves for about an hour in a double boiler I added a little bit of water from the iron mordant bath...  the outside color of the bundles went instantly from green to gray!  Chemical reactions... I failed Chemistry in high school so I can't tell you why it happened just that it did... so cool! I let them boil gently for another hour... 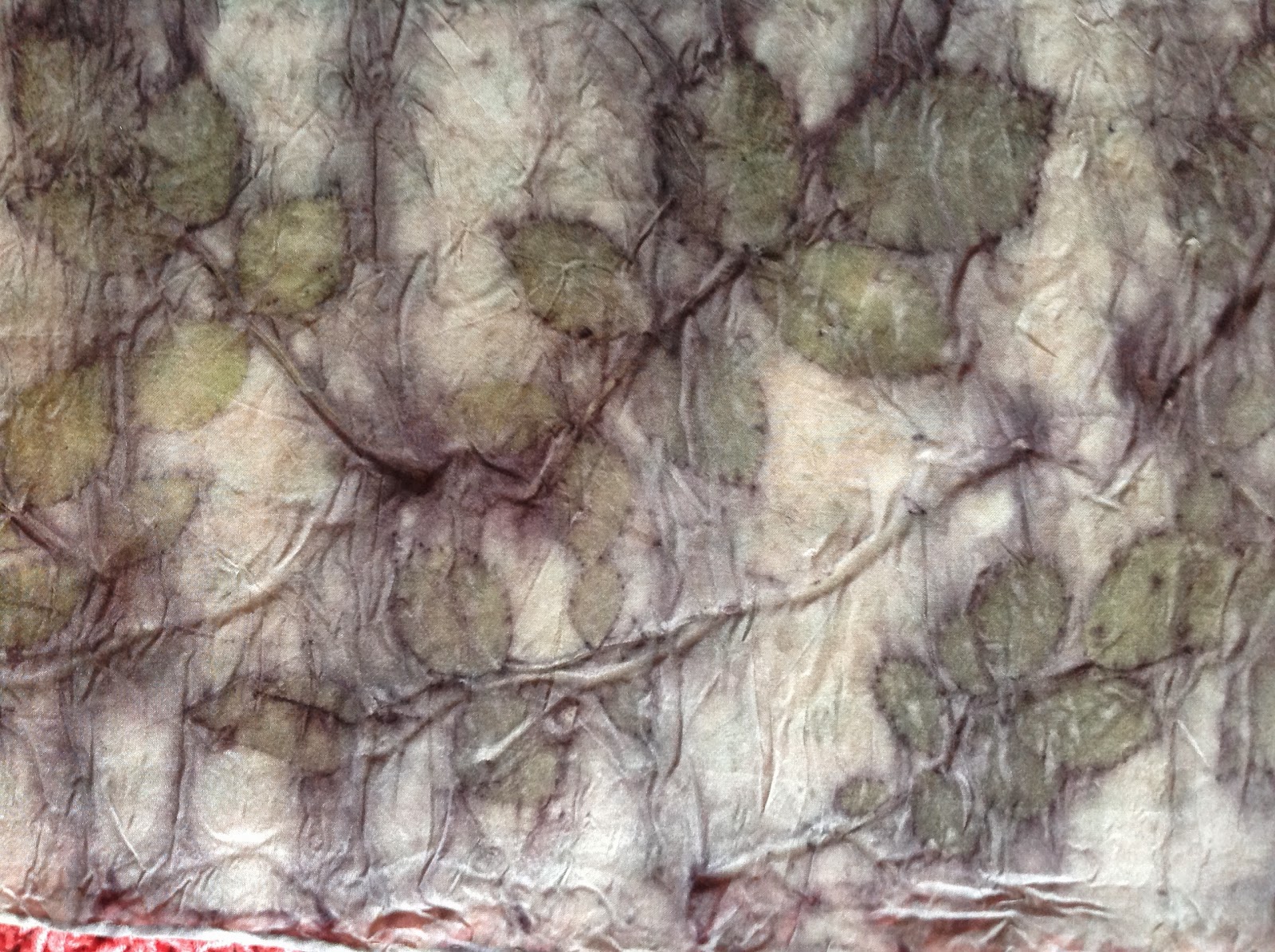 I covered the leaves with plastic wrap this time so that there was no double printing through the layers ( I checked my box of plastic wrap it said microwave safe so I figured I could boil it as well... I kept checking it as it boiled and it was perfectly fine...) I also made a core to wrap the scarves tightly so that the leaves got the best surface contact with the scarves. I rolled up some heavy cardboard and covered it really, really well with plastic wrap. I did poke a small hole in each end of the roll because as it was boiling it started to puff up from steam! 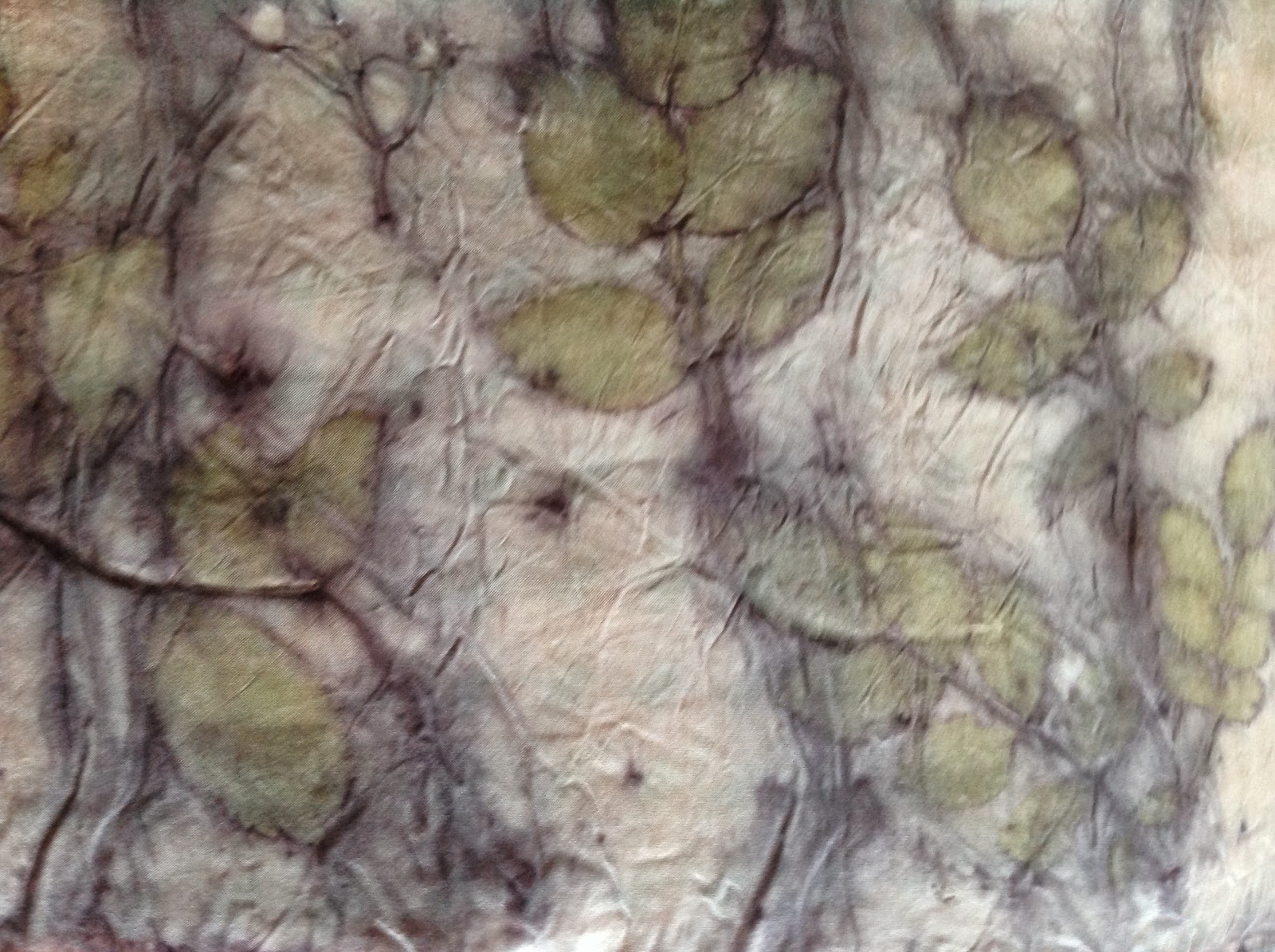 I only let them cool for a few minutes when they were done because I couldn't wait to open them up! 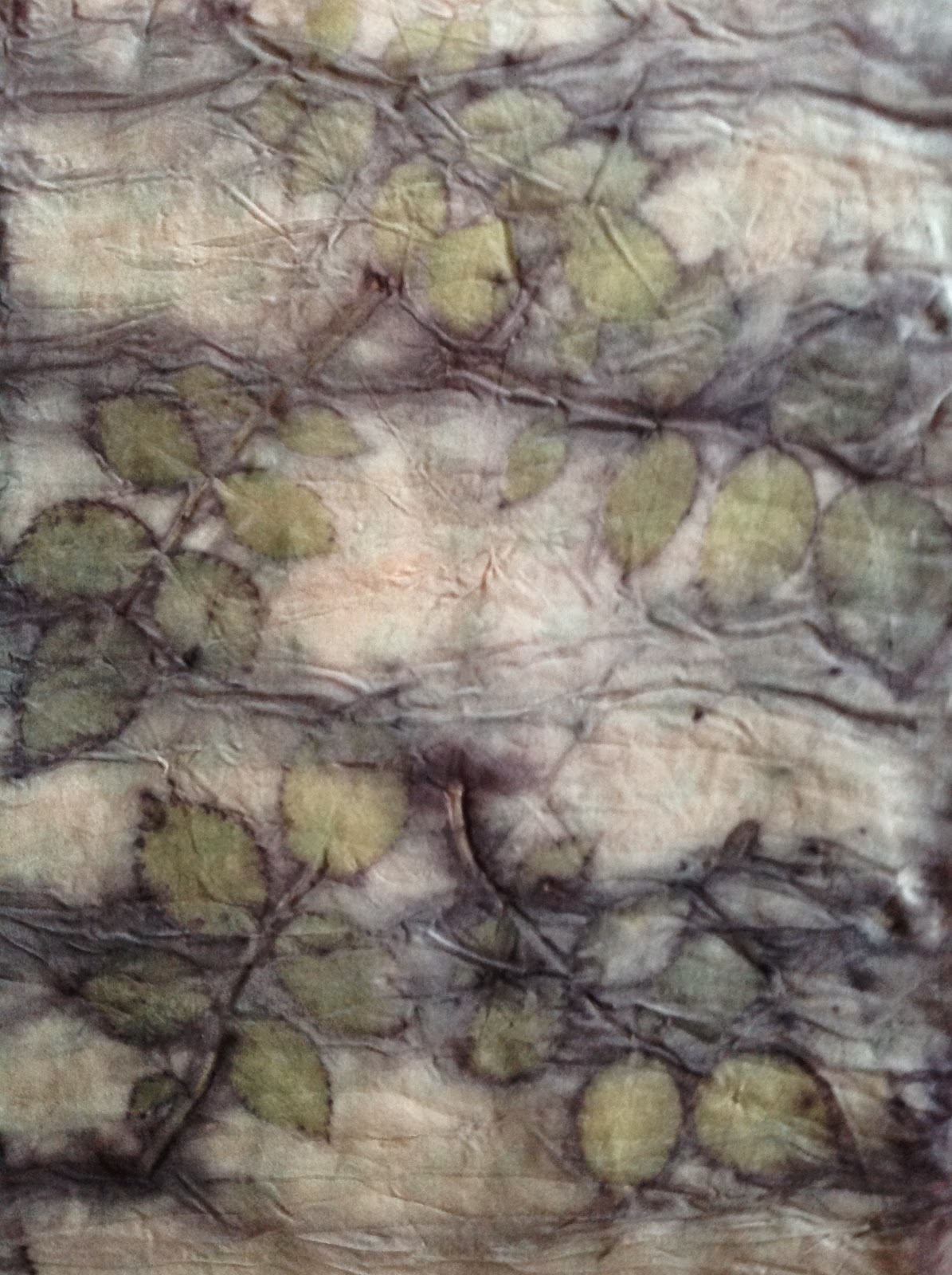 Since the two scarves are short I am going to sew the two of them together to make one larger scarf!  So happy with the results!!!  I ordered some more scarves from Dharma Trading.  I am very happy with the quality and they shipped my order very quickly. This time I ordered some bigger scarves ( I got small, inexpensive ones first to practice) and one that is a silk/wool blend. Wool is also supposed to be very good for eco-printing.  Now I am going on the hunt for fresh eucalyptus at the florist... 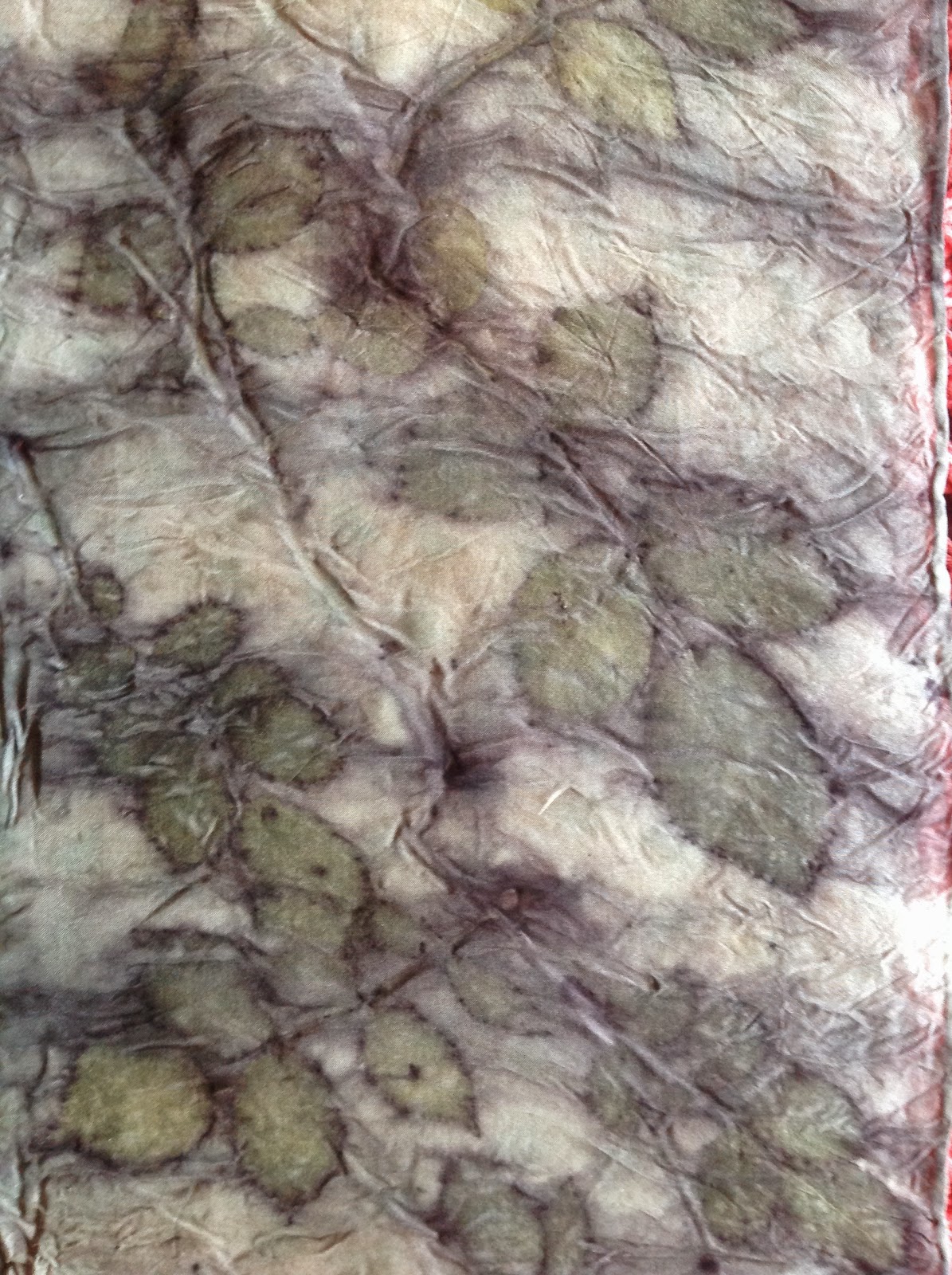 I spent some time roaming around my local Michael's yesterday afternoon. I had dropped my daughter and a friend at the mall to shop so I took this opportunity to walk around and browse without a teenager whining, "I'm bored"  "Are you done yet?"  behind me!  I found this desk organizer on the cheap and decided that I was going to re-design it with the same "cover it with white contact paper" technique I used on my notebooks from my last post. ( inspiration from Alisa Burke ) 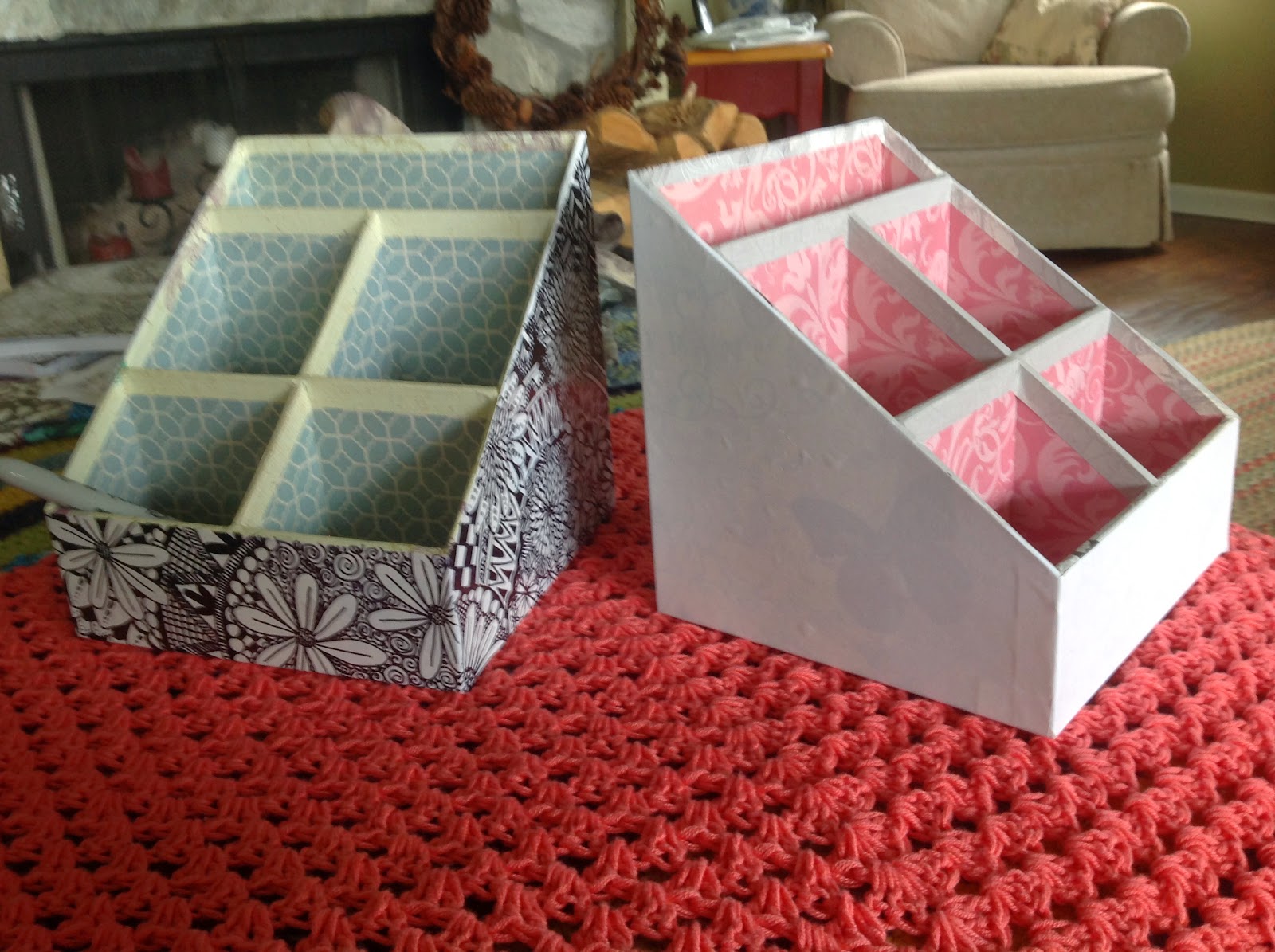 I bought two since I have two desks ( two schools) I picked two that had lighter colored backgrounds because the patterns show through the contact paper slightly, the lighter the background the better. 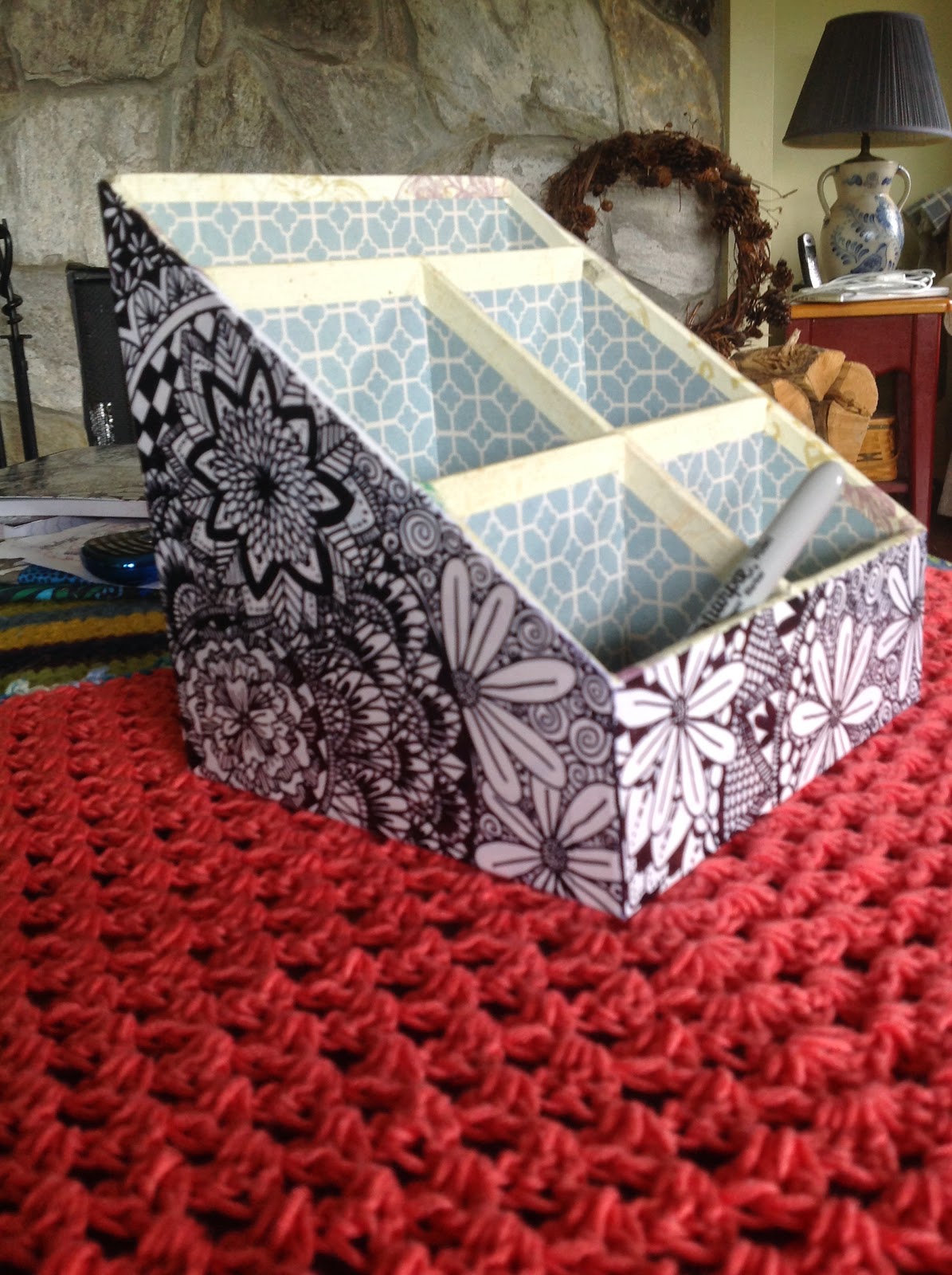 Once you start doodling though it doesn't show anymore... 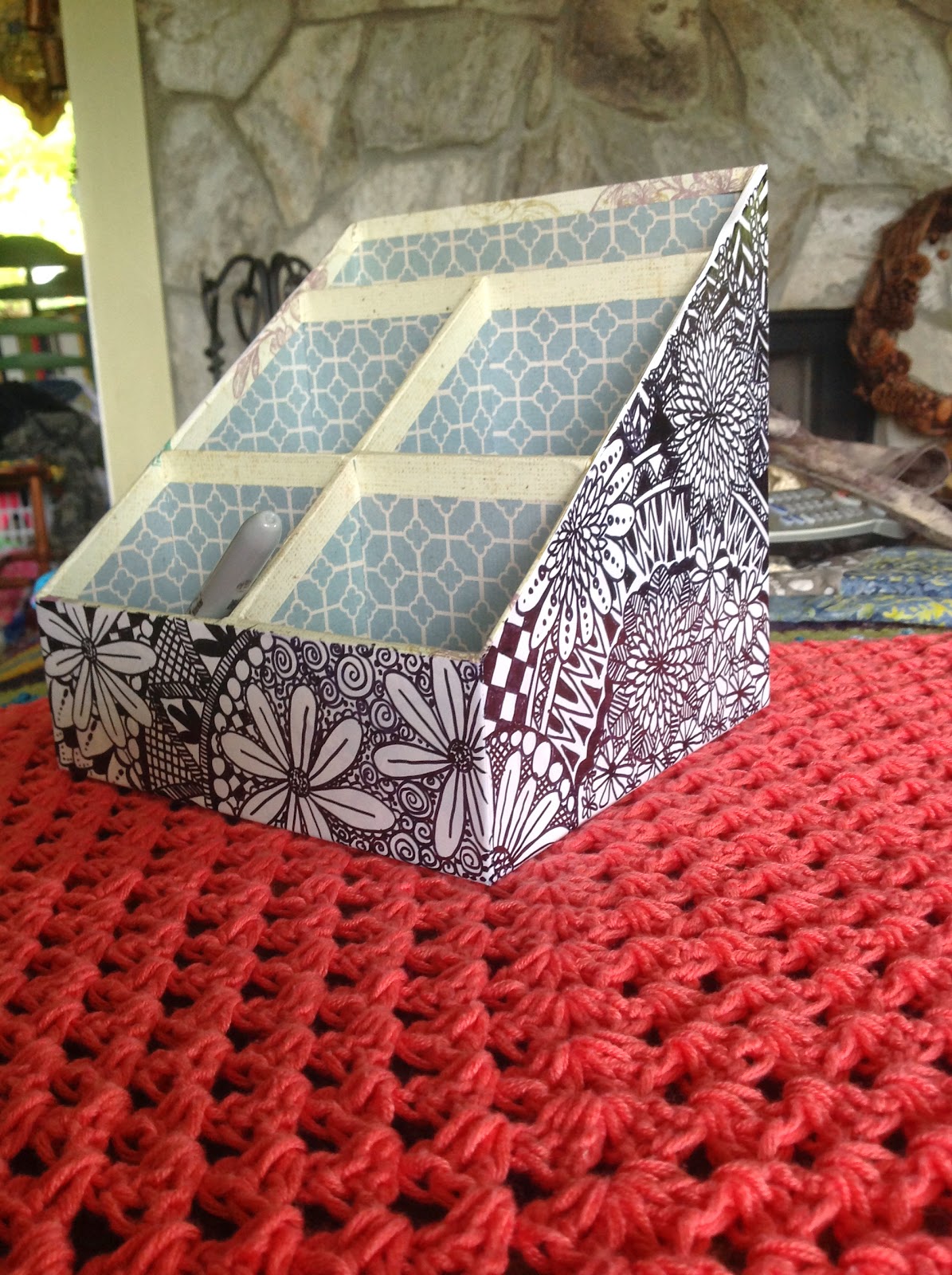 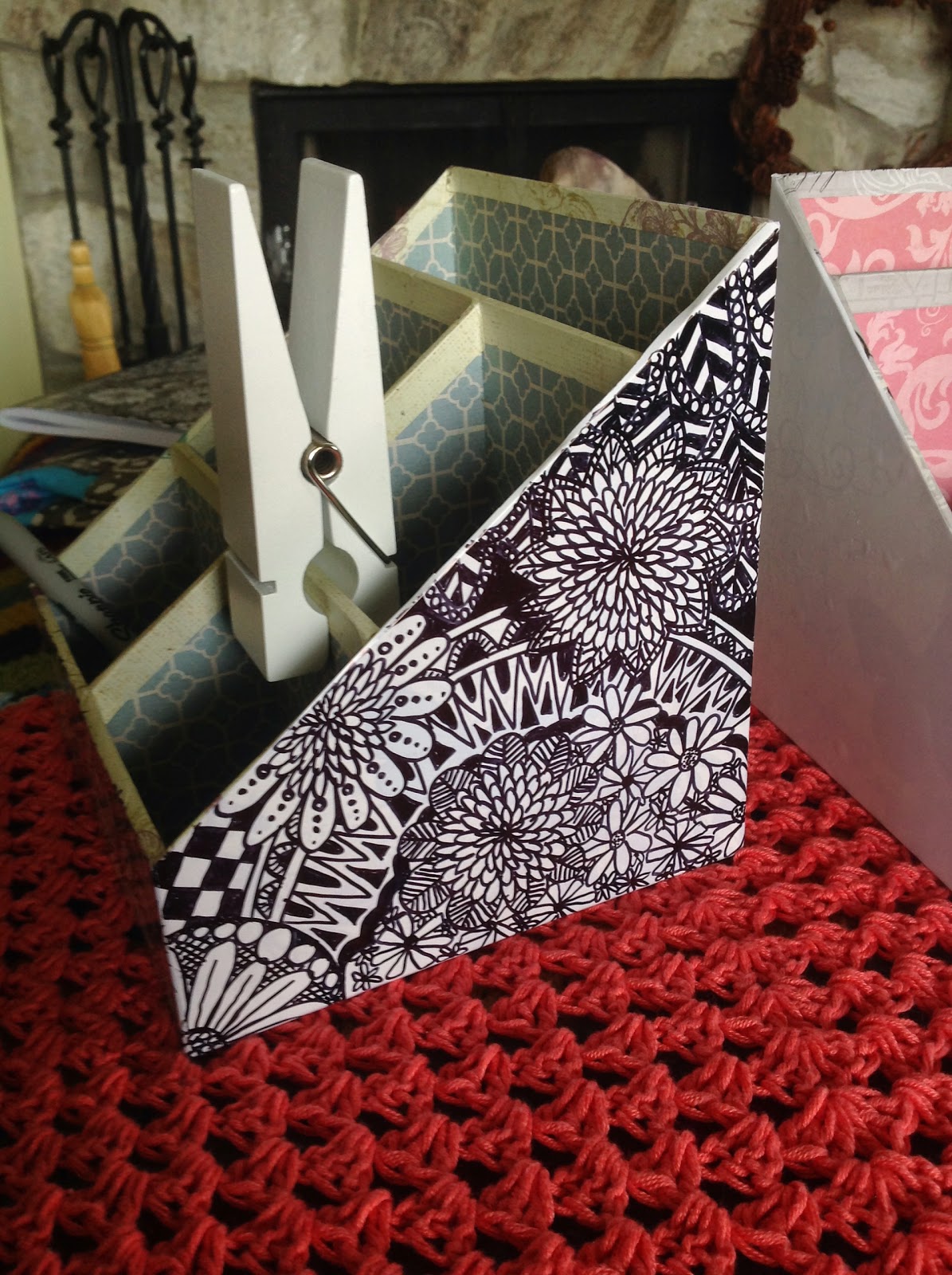 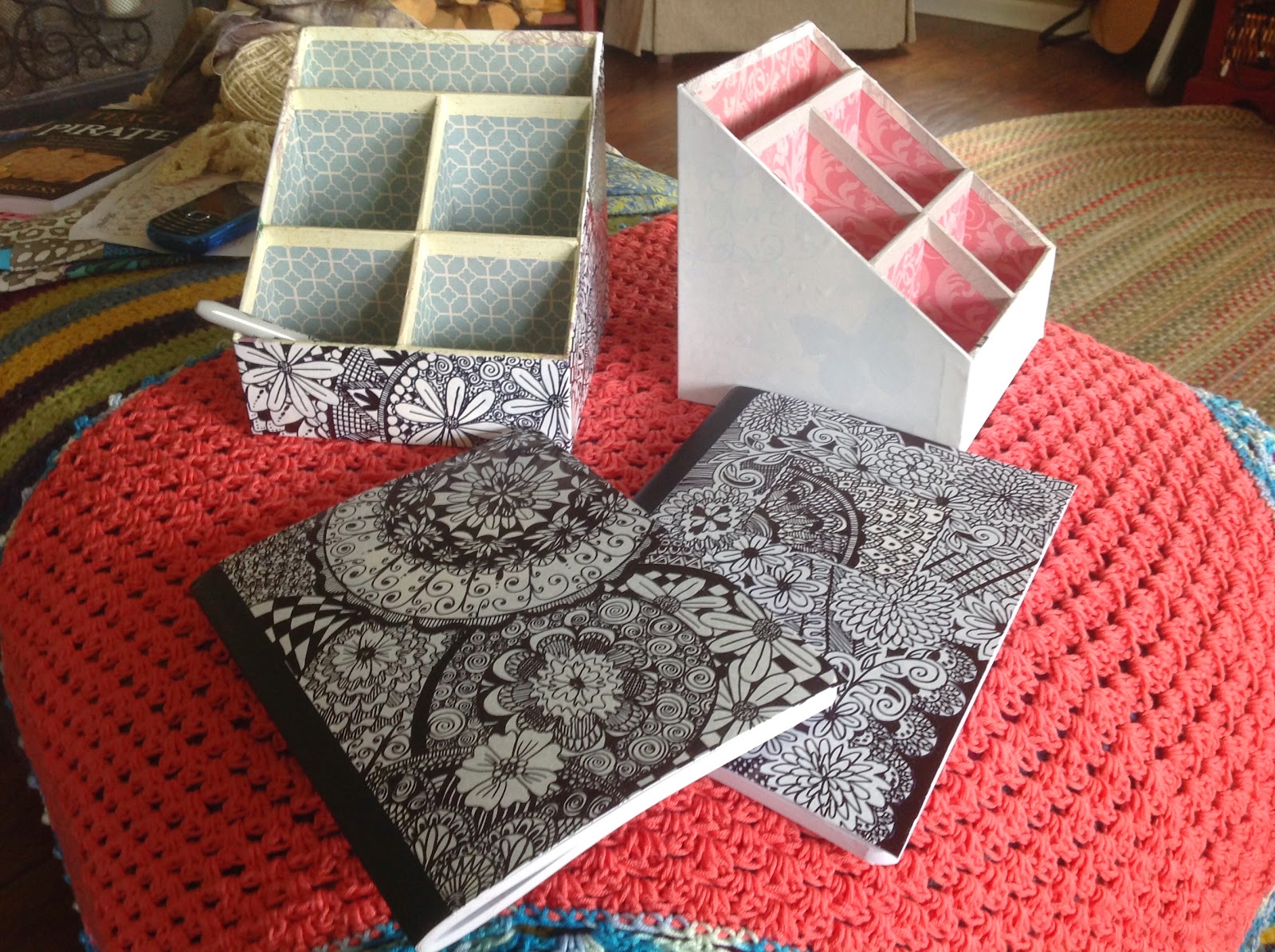 Two notebooks done...  I was able to doodle one of the desk organizers while watching "Shark Week" last night.  I will probably work on the other tonight...